LANSING, Mich. — Sen. Michael D. MacDonald expressed frustration with much of the governor’s $947 million in line-item vetoes, which cut funding for roads, schools and public health.

“I was proud to help deliver a responsible and balanced budget on time that increased investments in our roads, children and communities while helping build a brighter future in Macomb County — without raising taxes,” said MacDonald, R-Macomb Township. “The good news is the governor signed the budget; the bad news is she then cut out nearly $1 billion in line-item vetoes, including $375 million in additional road funding and $128 million from the K-12 school aid budget.

“The governor’s irresponsible cuts will impact Michigan children and veterans and put our public health and safety as risk.”

“Many of the governor’s decisions don’t make any sense, such as running on fixing the roads and then vetoing nearly $400 million in additional road funding,” MacDonald said. “Cutting funding for pregnant women, mental health and autistic children because we didn’t include her 45-cent gas tax increase seems particularly harsh.” 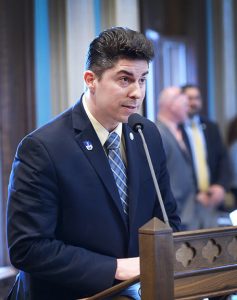